Chips with peanut sauce and an upside down weekend 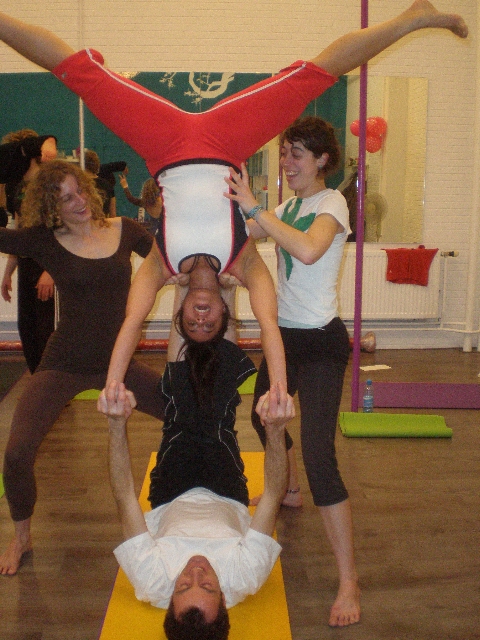 Running to the airport, as usual (I must thrive on the stress of nearly missing a plane) my friend Claudette and I were on our way to Amsterdam for a weekend of Acroyoga with Jaqui Wan and her teaching partner Tobias Frank from Germany. We were too late at Gatwick for any proper lunch so it was a quick juice to take on EasyJet and chips with mayonaise and peanut sauce at Schipol Airport (tried and tested my Claudette on a trip to Holland at new year.)

We only knew the hotel was on a ringroad (so figured not in central Amsterdam) however it was a 15 minute bus ride to Rasa Lila the yoga studio housed in an old school building, along with lots of other creative businesses. So it was a train to Central Station and then a taxi. We discovered on the way back that we were actually two stops from the airport, on the way the centre of the city: doh!

No time to try out the delights of the spa as we had to rush off to the first session of the weekend at Rasa Lila.  Luckily we met Jaqui and Tobi on the way in as we were a bit perplexed at the address and they carefully steered us the back way into the studio to avoid the hall floors that had just been polished.  The studio was small but perfectly formed with a beautiful mural on one wall, wood floor, low lighting and a cup of tea on arrival.  Friday night was focused on spotting – or how to ensure the flyer is safe at all times and was a great way for the group to bond and build trust.  I think Claudette and I had travelled furthest – though one student had driven from Belgium and was going to Barcelona the following weekend since there are no classes in her home town!  Yes, this Acroyoga business is worth travelling for.

Saturday we started with meditation and group check in and were soon launching into Jaqui and Tobi’s famous “bootcamp” conditioning exercises – think arm training first thing in the morning – but totally necessary to built up strength especially in the core muscles…”dry noodle!” being Jaqui’s cry all weekend.  By mid morning I could definitely “feel my body” and in a good way, especially as I tend to spend far too much time in front of a computer.

Then the acrobatics started in earnest with handstand practice in small groups to build our strength and balance in preparation for the partner acro for the rest of the day.  Lunch (nicked leftover breakfast from our hotel!) was suitably light so we could keep up for the afternoon. Claudette and I spent most of the afternoon developing our basing skills – you have to be flexible, strong and very present (as of course do the flyer and spotter) to balance your partner in a series of yogic/acrobatic moves on your hands and feet whilst you are lying on the floor with your legs at 90 degrees.  We had amazing fun and at the end of the day (even after a great Thai massage) we were definitely ready for the hotel spa which was most certainly worth it!

Sunday morning I could really “feel my body” and wasn’t sure I was going to keep up until 5pm…but with my usual determination I kept going.  We started with a chanted meditation to come together as a group, and after our usual check in we went into a hardcore asana sequence for the next 45 minutes.  Then into different groups to learn more moves from Jaqui and Tobi.  Before lunch it was announced we’d be performing at the end of the day – the clue should have been the question at the beginning of the day “what has been your experience of performing in the past”!

A delicious lunch at a local café was followed by an afternoon of working out what our group’s sequence was going to be for the end of the day.  We all took turns in both basing and flying at some point which kept us on our toes…and amazingly it all came together, especially as the first time we heard the music was when we were “on stage”!  The skills  in the room were really impressive and we had obviously all developed a lot and had a great deal of fun over the course of the weekend.  The day finished with the group carrying each person individually over our heads to give them a massage to go home with!  It now feels like I have a whole new Acroyoga community in Holland and I hope to re-connect very soon and turn my world upside down. 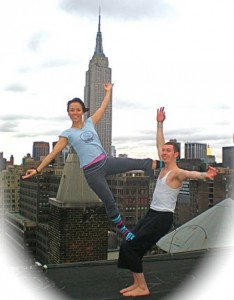 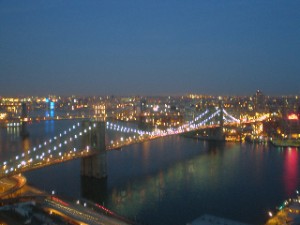 Don't you just love the view!

I was in New York for about a week, but am now in Chicago preparing for a weekend workshop. Anyhow you maybe interested in know what I got up to in New York, after getting over my mild jet lag and general over excited anxious hysteria in actually being here.

Firstly, stayed with a friend who happened to be out of town, but very conveniently lives on the 17th ﬂoor of big corporate looking building in the Financial District.

Guess what we landed gold, with a view to die for… looking out onto Brooklyn Bridge.

Anyways, I managed to check in with a couple of yoga studios in New York, which there are plenty to choose from. I did an Anusara master class at Vira Yoga, Vinyasa Flow at Kula Yoga Project and Flight School with Raghunath – oh my God! handstand vinyasas you have to check this guy out!  He does not have a lot on YouTube but I found this.  Any how I had so much fun in his class as I really got to work on my handstands in a dynamic and ﬂuid way.  I am so checking him out when I get back to New York in a week’s time. 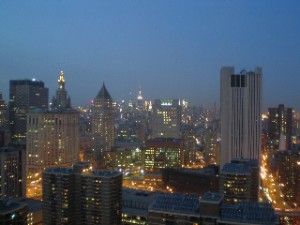 As for our weekend ʻNo Nonsense (aka Nonsense) Acrobatics Intensive, both Tobias and I were so humbled to have taught at Om Factory one of the homes and long established AcroYoga communities in the United States and to be supported by the New York teachers was true honor.